Converting pressure from PSI/BAR to BAR/PSI

1. Converting pressure to another unit

Convert pressure from bar to PSI and vice versa? Heard of Pascal? We give you the complete explanation, tell you how to make the conversion and illustrate it with concrete examples.

Pressure is the force per unit area. The pressure of liquids and gases can be represented in different units. The official unit of pressure is Pascal (PA). One Pascal is defined as 1 Newton per square meter. In a formula, it then looks like this:  P = F / A, where P stands for pressure (in Pa), F stands for force (in N) and A stands for area (in m2).

However, Pascal is not the only unit used for pressure:

The bar is originally a British unit, and 1 bar roughly corresponds to the average air pressure at sea level (although 1 atmosphere (atm) is a better description). The bar is defined as 100,000 Pa, or 100 kPa. This unit is pretty much the standard reference when it comes to pressure.

History: Bar was once introduced by Vilhelm Bjerknes, a Norwegian meteorologist who was at the forefront of modern weather forecasting. The term “bar” comes from the Greek word “baros,” meaning weight.

Current usage: Although bar is the unit of pressure, it is not accepted by the International System of Units (SI) and is even disapproved in some areas. The International Bureau of Weights and Measures, while indicating that authors are free to use bar, has not included it in the permitted list of the SI.

Millibars (symbol: MB) is also commonly used to describe atmospheric pressure. Where atmospheric pressure equals 1013.25 mbar (101.325 kPa). Meteorologists and weather forecasters worldwide use this unit, as an expression in Pascal would lead to much longer numerical results.

The atmosphere corresponds more closely to the average air pressure at sea level, and is defined as follows: 1 atm = 101.325 Pa; so just over 1 bar. Air pressure is also regularly expressed in millibars or hectopascals. In this case, 1 millibar is exactly equal to 1 hectopascal. 1 atmosphere is therefore 1013 millibars and 1013 hectopascals.

Definition: A PSI is a unit used worldwide.  It is defined as the pressure created when a force of one pound-force is applied to a surface of one square inch. One PSI is approximately 6.895 Pascal (N/m2).

History: This unit finds its history in the imperial and American system of units of measure. It is based on the avoirdupois system, a system that uses weights in terms of the avoirdupois pound, which was standardized in 1959. The system came into use in England about 1300 and was used primarily in the international wool trade.

Current Use: PSI is used worldwide to measure a lot of pressures. From tire pressure to gas pressure and quite a few others. Although the Pascal is used more in the scientific context, PSI is used more day-to-day. Especially in the Anglo-Saxon countries.

To convert from BAR to PSI, multiply by 14.5 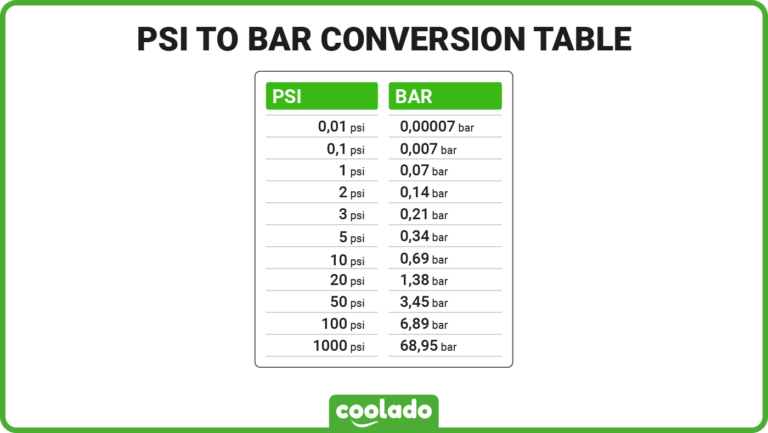 Newer What is the difference between a Schrader, Presta and Dunlop valve?
Back to list
Older Nitrogen and Tire Underinflation
close Create an Account
Sidebar
We use cookies on our website to give you the most relevant experience by remembering your preferences and repeat visits. By clicking “Accept All”, you consent to the use of ALL the cookies. However, you may visit "Cookie Settings" to provide a controlled consent.
Cookie SettingsAccept All
Manage consent

This website uses cookies to improve your experience while you navigate through the website. Out of these, the cookies that are categorized as necessary are stored on your browser as they are essential for the working of basic functionalities of the website. We also use third-party cookies that help us analyze and understand how you use this website. These cookies will be stored in your browser only with your consent. You also have the option to opt-out of these cookies. But opting out of some of these cookies may affect your browsing experience.
SAVE & ACCEPT